Sorry blogland for being so distant, I’ve just had a LOT of work to do – and I’m still doing it. I’m going to be on hiatus for the next few weeks probably, unless I feel like procrastinating again like I am tonight.

I’ve been busy with my research paper on the offshore fishery, with writing stories, with reading chapters in my ethics guidebook. There’s been a lot of stuff going on!

This weekend Aaron and I went to Piccadilly for a drive, little did I know there was a gem of a restaurant out there that I had certainly missed out on. Aaron works out on the peninsula almost daily so he’s been there a few times, but this was my first. It’s called Oliver’s Restaurant and the food and atmosphere there is quite nice.

I had the Oliver burger and fries with hamburger meat, gravy and onion. Man, don’t criticize, that stuff tasted awesome and I regret nothing.

Here’s a few photos from that day.

This Labour day was quite bland weather-wise, but kinda nice at the same time. It was really overcast, but had a great warm wind. Aaron and I went to Tim’s for some coffee and then headed out to Felix Cove (on the Port au Port peninsula) to check out the Alpaca farm. Here’s a few pics. 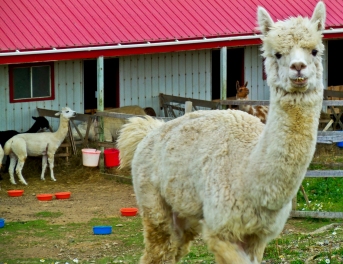 I’m ready for my close up!

I fed an Alpaca!! lol

Aaron wasn’t quite as enthused, nor was Mr. Alpaca lol

This photo was taken at a new beach, not the old faithful Stephenville Crossing beach you’re used to seeing. I’m not sure where this one is located exactly – It’s between Kippens and Port au Port, if anyone can provide a name for me that would be cool.
It’s a really nice area, it’s partly sandy, partly rocky. Easy access for vehicles too. I saw a few fire pits down there that people made with rocks so I’m guessing it’s a popular place for that, I wouldn’t know because I don’t spend much time in that area.
Anyway, I’m finished up my contract with the newspaper I was working at. It was at times challenging, but the people I worked with were great so it made work life a lot easier.
Well here’s the pic, I’m not at all tired so I’m going to go find something else to preoccupy the rest of the night with – it’s too hot to sleep right now.