One of the takeaways from this presentation that I attended was a heart-stopping moment when an elder Inuit woman said, “I am from here,” when archaeologist Anatolijis Venovcevs spoke of his favorite artifact, a brick, found at Hebron in Labrador. For anyone who does not know, Hebron is the former site of the Moravian Mission that inhabited the area beginning in 1830 and was disbanded in 1959.

You may recognize the name Hebron because of the collection of news stories that tell the tale of the Abraham Ulrikab family that were from Hebron and were exhibited in zoos in Europe in 1880. Besides the partially grim history, many Inuit have warm memories of Hebron, and it was very easy to hear the sorrow in the Inuit woman’s voice as she said, “that’s my home.”

Another takeaway from the meeting for me was the fact that so many people showed up and showed genuine interest in the historical artifacts that were unearthed in Labrador.

One instance I spoke of personally during Q&A was the Maritime Archaic Indian Burial Mound at L’Anse Amour on Labrador’s southern coast. To this day, you might miss it while you’re driving towards the lighthouse. I don’t feel it gets the respect it deserves and should be cordoned off so that some passerby doesn’t disturb it, so that development doesn’t destroy it and see the historical landscape become irreparable.

The ultimate takeaway from this event? If you find an artifact, first off, don’t be scared. Take a photo if possible and record as best you can where you found it. Most people carry around phones with them that have GPS capabilities, write everything down. Be gentle with the object(s).

While it’s frowned upon to disturb artifacts, many people have them. I’m sure I have family members who have them (who I will be contacting later just to check haha). The main goal is to contact the provincial archaeology office and tell them what you have and where you found it. Because only then will proper documentation be made and sites like the Maritime Archaic Burial Mound be further protected from potential destructors. If no one knows it’s there, nothing can be done to save it and the history that it carries.

On my walk to the truck I was talking to an older gentleman about the sites we were interested in, the artifacts that we found interesting, and he asked me if I was an archaeologist. I have to admit that made me smile.

The following pictures show some of the things that were unearthed and/or discovered at sites ranging from Conception Bay, Newfoundland to Ramah Quarry, Labrador. Descriptions taken from Venovcevs report linked above. 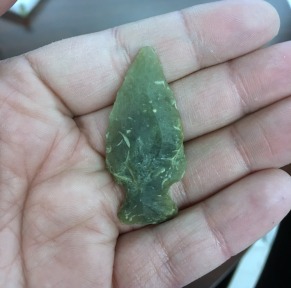 Stone Point from Okak Islands, Labrador. Found outside of a fox hole at Tikkigatsuk. Appears to be from the Maritime Archaic period, with sites dating between 6,500 and 3,200 BP in Labrador. 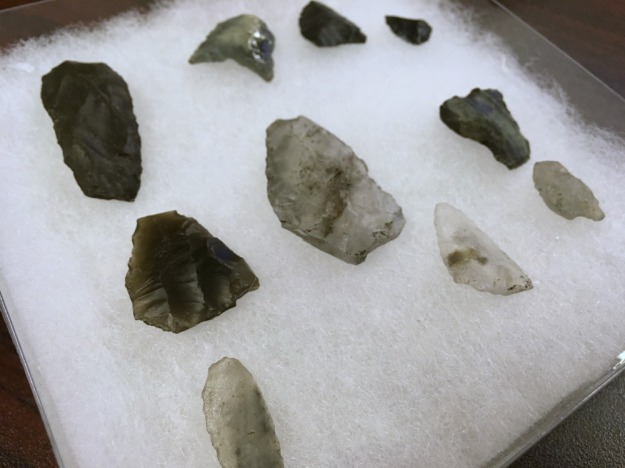 Found at Battle Harbour. The Dorset Palaeoeskimo period lasted in the province between 2500 and 700 BP and represents an assemblage consisting of tip-fluted harpoon ends, triangular and thumbnail scrapers, and microblades.

The maker’s mark suggests that it was made between 1865 and 1929 by a firebrick making company from Stourbridge, England. Curiously discovered by Carol Brice-Bennett near a building after being used to hold down a tent wall.

One thought on “Everything That Lies Beneath (And Some Things Above)”