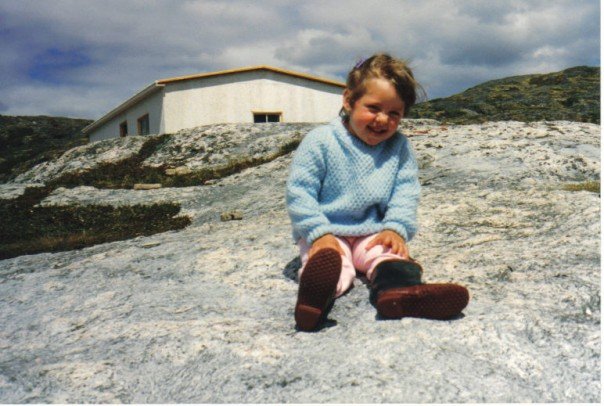 This is where I come from, this is who I am.

I was raised here until I was four years old. My parents were forced to relocate to St. Lewis, Labrador, so that I could get the medical attention I needed (I had seizures as a kid). They also wanted me to go to school of course.

This little ‘village’ had only three families. Three different sets of Poole’s.  On the house to the far right lived Me, Dad and Mom. The middle house was my grandparents, Hubert and Doris, on occasion my Aunts Lucy and Loretta would be there as well, sometimes my Uncle Barry. The third house is missing from the photo, My Uncle Jim (now deceased) and Aunt Doreen.

I have very few memories of the place. A lot of the memories I do ‘remember’ are things that I think people have just told me about the place and I just inserted them into my mind’s vault and called them mine.

I was told that as a kid I would eat at my parents house and run over to my grandparents house with my rubber boots on, asking for food once I got in the door cuz “Mom never fed me.”

Guess that explains some things now.

I was also told that my cousin Tim (Uncle Jim’s son) and I used to fish for Rock Cods and Scuplins off of a large rock down from my house. My grandmother also told me that she used to take me for a ‘row around the cove’ when I was too fussy to sleep and the waves would put me to sleep.

One thing I do remember quite clearly happened in my Uncle Jim’s kitchen. I remember the sun just starting to go down, the way the strands of light flickered in the window made of tinted yellow plexi-glass. I remember Aunt Doreen and Uncle Jim looking out the glass window on the opposite wall saying, “Look, look!” and I jumped up to the other window and saw whales blowing in the cove. I think there were four of them. I didn’t know what they were at the time, but the memory always stuck with me and I found out later on that they were Orcas (aka: Killer Whales).

I guess the real point to this blog is this; it doesn’t matter where you came from, or where you’re headed – home is just that special place in your heart that will never go away. Hills Cove is that place for me, I hope I can go back there someday.