I did an interview tonight with Anastacia Hopkins, the president of the Bay Theatre group here in Stephenville.

In the coming weeks, Feb 12 to be exact, the Bay Theatre will be putting on a new show titled “A Sweet and Sour Valentine”.

“The show is not just meant for the lovey-dovey couples, it’s really one for everybody,” said Hopkins.

“We have a kind of grumpy host- who’s Cupid, Cupid is really not on the pro side of love right now so he’s going to add some comedic elements to it,

The event also promises poetry, comedic scenes, and an extended intermission for some sweets and treats.

Tickets are available now at the Stephenville Arts and Culture Centre box office. Tickets are $15.00, or $13.00 for seniors and students. The show starts at 8pm! 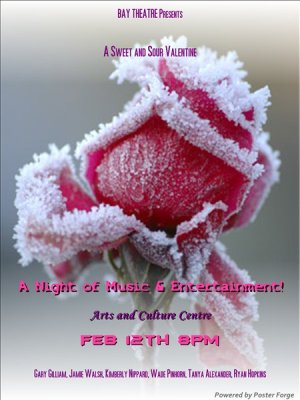